One of Australia’s most celebrated traditional artists, Charles Billich, is shifting into digital art and Non-Fungible Tokens (NFT) with his own NFT project. His first work in the series is called Journey of Flat Earth and explores the recent upheaval of COVID-19 and the unknown of NFTs and blockchain. His first NFT artwork also brings his visionary art to life in full motion 3D for the first time ever.

Described by Art Evolution’s Christopher Talbot as one of the world’s most important living artists, Charles Billich is also one of the most credentialed artists of all time. The modern-day surrealist has enjoyed a colourful, unconventional career and personal life.

Born in what is now known as Croatia, Charles’ birthplace has changed nationality four times from Italy, Germany, Yugoslavia and finally to Croatia, all within his lifetime. Early on, he migrated to Australia and studied to become an artist, drawing on his unique experiences to forge his style.

He was famously commissioned to develop the Bing Ma Yong Terracotta Warriors series in China, and his works have hung in the White House, the Vatican and the United Nations. His famous surrealist cityscapes of some of the world’s major cities combine popular landmarks and the energy of each location in unexpected ways.

At this later stage in his career and life, the artistic luminary is again looking to break with convention by exploring the world of digital art and NFTs.

“With oil, you write a book. With a drawing, maybe a page, at best a chapter. I now want to write a movie, using my paintbrush,” said Charles Billich.

For Charles Billich, at the age of 87, this stage of his life has been one of rebirth and exploring the culture of youth and new ways of thinking. The NFT project and his shift onto a digital platform signify his commitment to continue making art across digital media. As Einstein said, “the fate of the old one recognises the culture of the young”.

Billich’s first digital work is fittingly called NFT 22.01 and is also known as Journey of Flat Earth. Within the work, two traditional masterpieces are featured, out of which the 3D digital animation is borne. The digital artwork is offered with an NFT as proof of its authenticity and originality.

Signalling his debut into the digital landscape, Billich captures this time in our history as a pivotal shift in our understanding through his eyes. NFTs are created out of the Ether or nothingness, from something which was not previously known about. For the artist, this recalls a time when humans thought our world was flat, much like a pancake. Billich reimagines this flat earth as a cubic shape travelling the cosmos. The face of Flat Earth is minimalistic and symbolic of the fragmentation of Earth.

The digital artwork is of a voyage without end, looping back to seamlessly connect where it began. The digital animator ventures behind the two-dimensional canvas to bring the dreams behind the painting to life. The 3D artwork explores the space and connections between the original diptych, bringing the elements of the master alive and raising further questions about his work. This piece is an experience, where the viewer steps back to take in an otherworldly perspective, almost as if a god.

Within his creation, there are elements and homages to Billich’s past and current works, including forms from cityscapes and his sculpture of Lady Justice. The short film also features his 1975 artwork called Inhabit, which had an environmentalist message about sustainably housing the masses with only light touches on the surface of Earth. The colours and shapes from that piece are used to create the second planet on NFT 1.02.

The start of the story begins here, with the six-sided earth forging a path through the cosmos. This piece is meant to be hung in two ways, up and down, so the artist has autographed the art more than once. 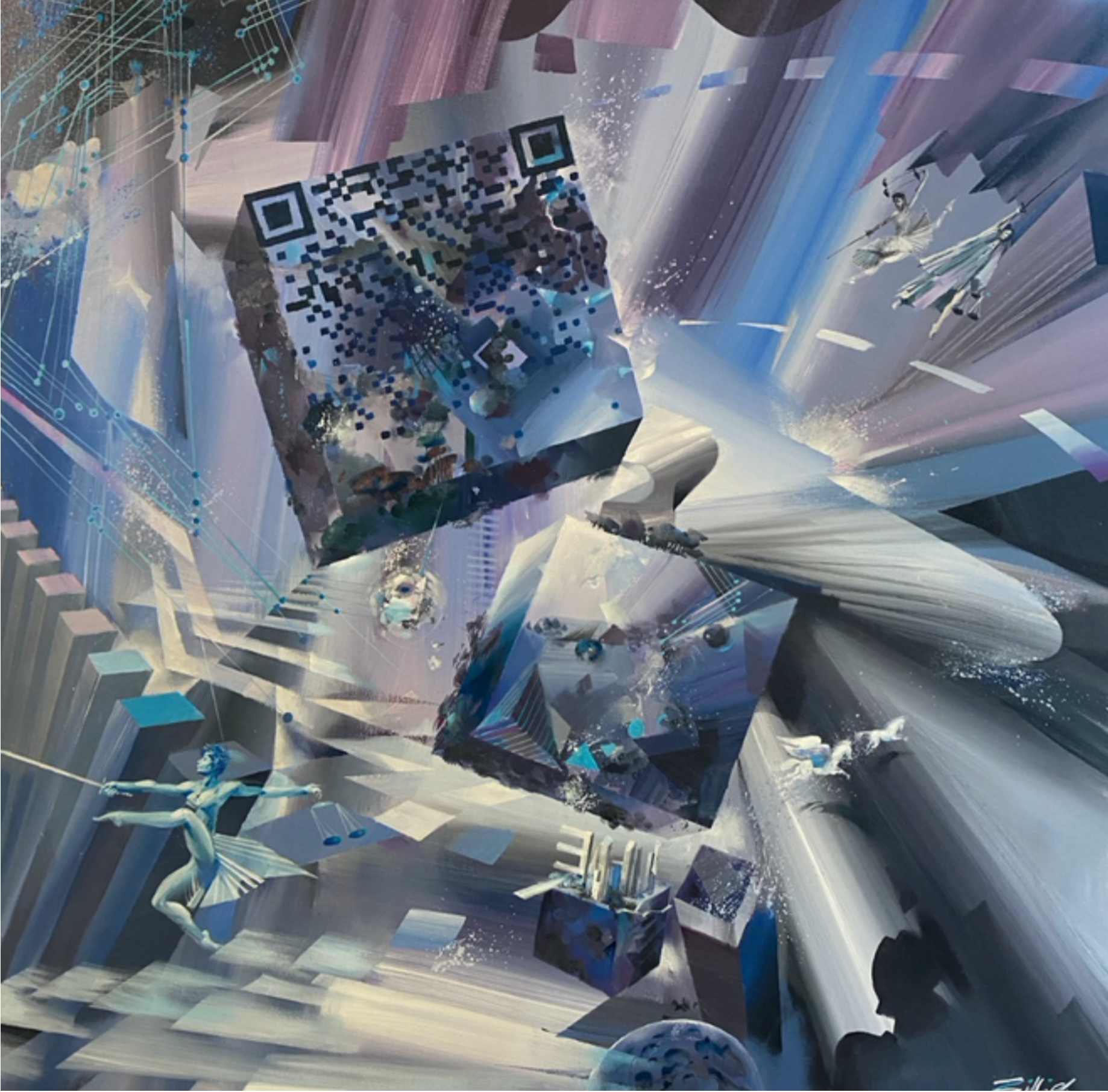 Here, Lady Justice returns as a cosmic superhero. As there are more than one Justice figurines, this raises the question of whether justice is absolute or viewed differently by those involved. The image of a QR Code in the artwork is an ode to the mass disruption caused by the COVID-19 pandemic, where QR codes became a part of everyday life. Like NFTs, they didn’t exist until recently. The artist playfully nods to anti-vaxxers and flat-earthers, combining their perspectives with the same stroke of his brush.

How do NFTs help artists?

An NFT allows the digital artist to say they created the art and have registered it through the act of obtaining a cryptocurrency token. Once obtained, it will predate any other token that can possibly exist for the artwork. This means the blockchain technology provides a system of registration that cannot be changed for that asset. The first token in time will prevail for recognising ownership of the asset.

Each NFT is digitally unique, and there are no other NFTs that are ever the same. With NFTs, artists can retain ownership or copyright of their works, and claim resale royalties directly, keeping them indelibly involved throughout the lifecycle of their artwork.

Investors, creatives and art lovers are invited to come and see this defining work for themselves at Billich Gallery at The Rocks in Sydney. Billich is already developing his next NFT project and is looking forward to bringing his art and style to life across digital media in unexpected ways. For more information, visit billich.com.